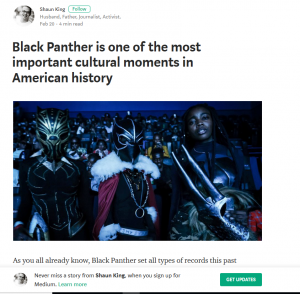 I’ve been watching the hysteria over populist fantasy cinema with building scepticism and bewilderment. The 21st Century has seen not just the rise of the sci-fi/superhero blockbuster franchise, but also culture wars conducted online and reflected in the media in which these fantasies are weaponised as vehicles for social justice. Hence the handwringing and triumphalism over the gender or racial make-up of the cast in the likes of the THOR or STAR WARS franchises – not films generally regarded as heavy with political subtext. 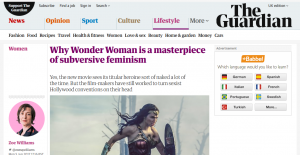 The release of WONDER WOMAN and THE BLACK PANTHER have kicked this into high gear, with excitement over the blows they struck for feminism and black rights respectively reaching hysterical proportions.

I certainly believe that films mean something, and that successful films mean something more. But aren’t they more of a barometer than a catalyst? One thing they tell us is that social justice causes, slickly presented, are very effective marketing tools. That geeks plus liberals equals a very profitable audience demographic. Because, believe it or not, at this level, film studios are thoroughly amoral entities. If the big bucks were in a reboot of BIRTH OF A NATION, that would be the next franchise on the schedules. 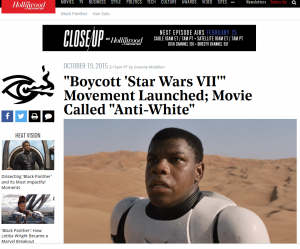 On the surface, a species of entertainment which is intrinsically based upon power fantasies would seem an improbable bedfellow for a social justice movement that fetishises victimhood. Yet it’s actually proven a very happy – and profitable – marriage. For, making the film’s hero a member of a demographic recognised as oppressed, filmmakers are freed of any pressure to justify a plot which hinges on violence as the preferred solution to a challenge. What’s more, nailing your blockbuster to a social issue almost guarantees plentiful free publicity. It only takes a few disgruntled fans to bitch online about the film’s play for social justice credentials, and the publicity department can just sit back and wait for the backlash to consume the liberal web and media. 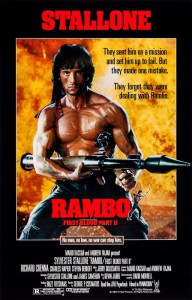 And is it significant that these films are all unabashed fantasies? Stories where the heroes are all superpowered and the villains vanquished in predictably poetic fashion. There is a long tradition of America using Hollywood to revise things that didn’t play out the way Americans might’ve wished. The Western is an entire genre dedicated to ennobling the nation’s morally problematic nativity. The first RAMBO may have been a broadly anti-war film, but the sequels were all about refighting – and winning – American military humiliations. 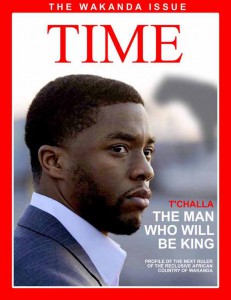 Is there a danger that lightweight fantasies like WONDER WOMAN and THE BLACK PANTHER are not representative of victories for social justice, but substitutes for such victories?

Because it’s easy to fight injustice if all that’s required is enjoying two hours of highly polished, undemanding entertainment while sat on your arse eating nachos.

I’m reminded of the recent campaign at awards ceremonies for glamorous actresses to show their opposition to sexual harassment by wearing black. Which is of course a very flattering shade. Might it have made more of a statement had the requirement have been to wear a shellsuit? And what, if anything, does this statement say? I would imagine most people, if asked, take an unspoken stand against sexual harassment. In practical terms, the stunt seemed more about raising profiles while condemning anyone who refused to play ball than anything more proactive.

Perhaps I’m too much of a cynic. At the very least these films illustrate that most people have no problem with a female hero or a black hero, which is cool. But maybe that’s broadly been the case for a long time, whatever the identity politics firebrands would have us believe.

I rewatched DAY OF THE DEAD recently. It’s my favourite zombie movie, and I’ve seen it numerous times. But this is the first time I’d really clocked that the hero was a tough woman, supported by a black man. Of course the film hadn’t changed, but our points of reference have, to where the race and gender of the characters are reflexively thrust front and centre.

And I’m not convinced that’s progress or even healthy.