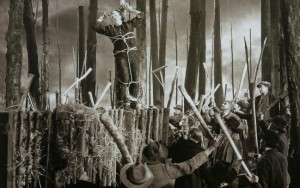 This year’s the 200th anniversary of the publication of FRANKENSTEIN and I hope to be involved in at least one project commemorating this. So I’ve been digging into all things Frankenstein. Where I’ve been reminded how fond ‘experts’ are of correcting anyone who refers to the Monster as Frankenstein.

Want to know a secret? 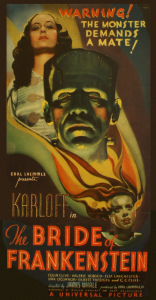 They’re wrong. While Mary Shelley never really names the creature, when people talk about the story today, they’re almost invariably thinking about the cinematic FRANKENSTEIN, not Shelley’s literary one. Specifically the Universal version brought to life by director James Whale, actor Boris Karloff, and makeup artist Jack Pierce in the 1930s, which diverges wildly from the novel, while establishing pretty much every FRANKENSTEIN cliche we’re all familiar with, from the Monster’s bolts to the huge, buzzing electrical machinery required to bring him to life.

And by BRIDE OF FRANKENSTEIN in 1935 – regarded by many as not just the classic Frankenstein film, but the best of the Universal Gothics – Frankenstein is clearly used to designate both the creature and his creator. In the movie’s prologue, Lord Byron is discussing the story with Percy Shelley and Mary, and refers to the Monster as Frankenstein – Mary does not correct him – and in every subsequent Universal classic FRANKENSTEIN film, the name refers to both creator and creature. 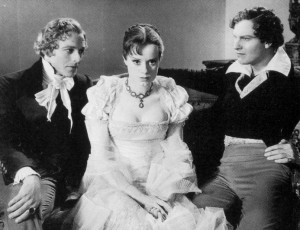 Having discussed the correct name for the creature, what might be the proper term of address for the creator? Baron or Doctor Frankenstein? Taking the same principle – that our common understanding of the characters owes almost everything to cinema – we can answer this quite categorically. While his status as the archetypal mad scientist makes the title of doctor seem apt, in almost every version of the story the young Frankenstein either abandons his academic studies in disgust at the ignorance of his professors, or is expelled for conducting unholy experiments. Either way, Frankenstein never graduates, so as a university drop-out is not entitled to employ the title ‘doctor’. His entitlement to the title ‘baron’ is rather tentatively established in the Universal Frankenstein films. But when Britain’s Hammer films adapted the story in 1957 with Peter Cushing and Christopher Lee, his artistocratic title becomes canon, and is employed in all of the studio’s subsequent Frankenstein pictures. 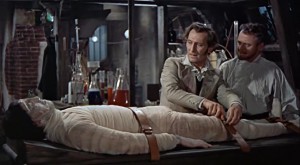 (I am of course aware of Muphry’s Law, whereby any attempt to correct anyone else invariably contains errors itself – and thus the circle of pedantry continues…)

Anyhow, as I intimated earlier, I have plans to launch some FRANKENSTEIN projects of my own in the forthcoming year. So, if mad science and unholy resurrections are your thing, watch this space…