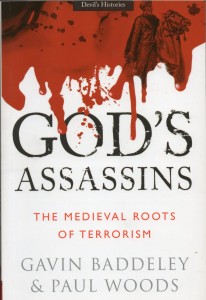 The first of the ‘Devil’s Histories’ co-authored with true crime expert Paul Woods, God’s Assassins delves into the controversial story of the Nizaris, the fanatical medieval Middle Eastern sect who intimidated their many foes with a policy of targeted suicide attacks. They became known as ‘the Assassins’, a title many believe linked to the use of the drug hashish in the indoctrination of the cult’s feared undercover operatives, though this, like so much about the organisation, is the subject of much heated debate.

God’s Assassins endeavours to pick apart the myth surrounding this sect that terrorised both Crusaders and Saracens during the Middle Ages, detailing one of the most fascinating and provocative sagas of this turbulent era. It’s a story of murder, heresy, drugs and deviance with powerful echoes in the modern age. Not least the employment of the Islamic doctrine that promised literal paradise for those Assassins that died on the sect’s suicide missions, the very same dogma that convinces modern suicide bombers to acts of appaling violence in the name of Allah…

‘God’s Assassins, the first volume in the Devil’s Histories series from Ian Allen Publishing, takes an alternative approach to the history of Hasan-i-Sabbah and the Hashishim… the story is far from simple, and Baddeley and Woods use discussion and narrat­ive passages to draw out the complexity of Hasan-i-Sabbah.The authors tease away these contradictions.

It is the second element of the volume, which runs as a series of threads throughout, that really captures the complexity of Hasan’s position in history. It is easy to trace his influence in modern Middle Eastern conflicts (although Baddeley and Woods counsel us, wisely, not to consider the Islamic world as an amorphous whole). The authors highlight the resonance of Hasan-i-Sabbah throughout the modern world. The Hashishim, and Hasan-i-Sabbah in particular, have become a symbol with many facets. The authors explore the different forms of assassination in the 20th century, particularly the use of brainwashing typified by The Manchurian Candidate. They investigate the use of drugs in conflict situat­ions and experiments by the CIA. The role of Hasan-i-Sabbah as a counterculture symbol in the work of William Burroughs is also considered. The Old Man of the Mountain, an alternative name for Hasan, is seen in such diverse people as Charles Manson and Osama bin Laden.

This volume may touch on too many subjects for some, covering as it does topics as diverse as the Aum cult, the IRA, Carlos the Jackal and the Church of Scient­ology. It may not be academically rigorous enough for others. The authors do, however, manage to take a different approach to exploring the diverse echoes one small group of people can have down the centuries.

God’s Assassins, the opening book in the series, traces the roots of what is perceived today as ‘terrorism’ to their origins in the medieval era. However, despite the weighty subject matter, this is no arid slog through the dusty corridors of academic history, as the authors combine effectively realised first person ‘faction’ with reportage of the era to produce an engaging document of the past. This is interspersed with explanations of how events dating from the Christian Crusades, and before, have resonated across the centuries.

Through identifying the genesis of the modern terrorist mindset as originating amid the legendary Hashishim cult (from which we get the term ‘assassin’), Baddeley and Woods not only throw light on the current climate of terror, but also identify the rationale that lies behind the action of many contemporary fundamentalist extremists. The book also effectively explores the modern phenomenon of political assassination, again tracing its source back almost one thousand years.

This is history viewed through the lens of popular culture, and in recounting its sequence of events God’s Assassins touches upon such varied and significant lodestones as the use of drugs to create fanatics, the concept of brainwashing and sleeper agents, and the manner in which William Burroughs evoked the spirit of the Hashishani to create a fictional figure of terror, thus unwittingly echoing the creative fictions that would later be employed by the West to wrest basic freedoms away from their citizenry.