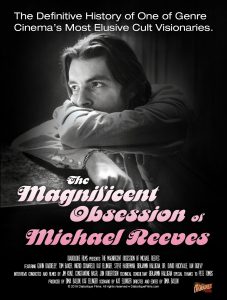 As autumn finally beckons, finally burying another sweltering summer, I have a number of projects, appearances and suchlike to announce. But let’s begin with a brief plug for an upcoming feature documentary, THE MAGNIFICENT OBSESSION OF MICHAEL REEVES. For those unfamiliar with his work, Michael Reeves was the greatest director we never had. Those in the know were touting him as the next Alfred Hitchcock, a prodigy whose instinctive grasp of violence and the macabre was second to none. But tragically he died of a barbiturate overdose in 1969 at just 25. The young director left behind just three features – THE SHE BEAST, THE SORCERERS, and WITCHINDER GENERAL. But all three are now recognised as indicative of vast potential, the latter in particular a cinematic landmark that still looms large over the horror genre today.

I was privileged to be asked to take part in a new documentary by Diabolique Films, peeling back the skin on the private world of this brilliant, troubled filmmaker. THE MAGNIFICENT OBSESSION OF MICHAEL REEVES premieres at FrightFest in August and Abertoir in November, offering a rare opportunity to preview this fascinating new feature on the big screen. (I hope to be in attendance at both events this year too – but don’t let that put you off.) For further info on this upcoming release, check out the Diabolique Films page here.