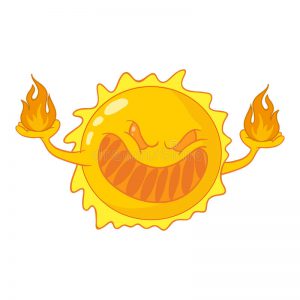 Sweltering here in another heatwave, there’s no denying that s
he summer isn’t my favourite time of year. All of those relentless rays are fine if all you have to do is sit in a pub garden by the river and while away the day in good company. But if you have things to do, shit to think about, places to go, it can wear thin fast.

You can tell when the thermometer has hit critical when the chavs start taking their tops off, to reveal the kind of physique only achievable by a programme of stealing bikes on a diet of cheap speed and Smirnoff Ice. They don’t have torsos so much as thoraxes covered in sickly off-white chitin.

And heat seems to have the same effect on them as kicking over a lukewarm can of lemonade has on wasps at a picnic. Usually, you could go weeks without enjoying a live Jeremy Kyle performance. Once the summer kicks in, angry morons in baseball caps seem to be everywhere, shrieking threats into mobile phones, gibbering at each other across busy streets, falling over tables in pub yards.

It is now officially impossible to find anywhere peaceful and secluded to relax in the sun which will not be invaded by noisy shitheads within thirty minutes. Contrary to the myth spread in the Bible, our distant ancestors weren’t driven from the Garden of Eden by the temptations of a serpent or archangels with flaming swords, but the arrival of a posse of cunts in trackie-bottoms with a pallet of Kestrel Super and a deafening sound system loaded with shitty hip hop…