I come from the last generation that grew up wholly without the Internet. It almost seems strange now to reflect that my first book was researched without a single recourse to the Web. But of course the Internet changed everything. One offbeat example might be dreams… 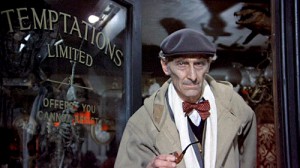 When I was younger one of my favourite recurring bitterwsweet dreams involved finding some magical shop down some hidden alleyway. Invariably it would be stuffed with wonderous treasures – toys usually initially – which I had never seen the like of. When I awoke, I was invariably struck with a melancholy sense of loss when I realised that the amazing place I had found and the incredible things I had found there weren’t real. Incidentally, my weakness for this notion explains why, perhaps, I remain so in love with the 70s horror film From Beyond the Grave, where the uncanny junk shop Temptations Ltd purveys surprises to luckless customers, presided over by the peerlessly creepy Peter Cushing.

Meanwhile, happily, as I grew older, I discovered unique emporia off the beaten path which – if not as literally magical as those of my dreams – were still enchanted caves holding objects of desire wholly new to me. Best of all, they were real, and the things you took away in your shopping bags didn’t dissolve at the sound of an alarm clock. I’m thinking here in particular of the shops I found in the labyrinthine heart of London’s West End during me adolescence, such as the delightfully dingy heavy metal basement Shades, or the irresistibly-named Dark They Were and Golden Eyed with its treasure trove of horror magazines and monster memorabilia. 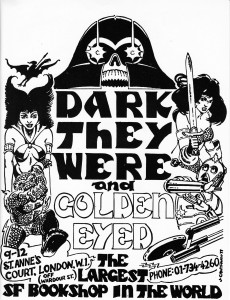 Both Shades and Dark They Were… are long gone, but I was struck on a recent visit to the West End by how all of their successors had also disappeared, with nothing springing up to replace them. Various factors are to blame, but the Internet has to be the biggest contributor to the demise of such truly special specialist shops. The initial discovery that Amazon, Ebay, Etsy and whatever now made most things accessible at the click of a mouse was intoxicating. But I was increasingly left with the wistful hangover of pondering what we may have lost, that perhaps that magic of discovery has gone forever…

Do modern kids dream about impossibly great web-sites which they can never find in their waking hours?

All of this has been a – rather rambling – preamble to something I wanted to publish on an enterprise that contradicts pretty much everything I’ve said over the last few paragraphs. Around last Halloween, a shop opened up here in the quaint and quirky, historical city of York which more than meets the qualifications I describe above for a truly magical space, full of wares that you didn’t know existed let alone that you wanted. It’s named Pandora’s Box. 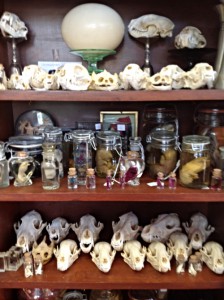 From a Vincent Price death-mask made from Belgian chocolate, to a lock of Charles Manson’s hair, or a baby’s-head candle, Pandora’s Box never fails to enchant, startle, intrigue and – on occasion – unsettle with it’s ever-rotating stock of offbeat curios, macabre ephemera and otherwordly oddities. I was immensely flattered when the owners Heather and Greg asked to stock some of my work, and Pandora’s Box is now the only shop on the planet where you can guarantee finding signed copies of my books.

You only have to look in the window to see that Pandora’s Box conceals myriad secrets and stories. So I resolved to quiz its proprietors on how the idea came together, and what it’s like managing such a unique venture. Heather – who is the friendly face behind the counter most days – answers most of the questions here, while her partner Greg prefers a more behind-the-scenes position… 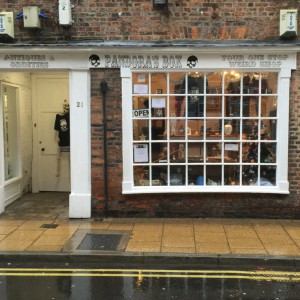 Why, when so many other businesses have migrated online, do you feel it’s important to have an old school bricks-and-mortar shop?
Heather I like the human experience. I like people. I like the eccentricities and sharing the knowledge of what we have with people. I like even the negative reactions to our collections. I mean I get mad of course when people are incredibly rude but if I can get them to see what I see, I feel so accomplished.  Most importantly with the stuff we sell it is invaluable to have the hands on experience for the touch and feel of an object. Greg isn’t always such a big fan of humans. 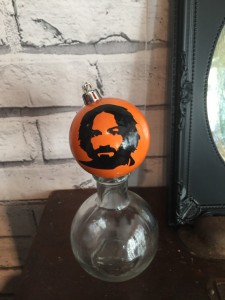 There’s little denying that a lot of what you sell – and indeed what I write about – could be described as morbid. Yet in my experience, ‘morbid’ people are often sensitive, kind and thoughtful souls. Is that your experience, and if so any thoughts on why that might be?
Heather I find that morbid people are kinder, more thoughtful and more genuine. I think morbidity comes from having a challenging  life with more hardship and loss, you either become morbid and have a great sense of humour or you become a bitter asshole. Resilience goes a long way and humour makes people resilient, not sure which comes first.  I think the macabre is actually beautiful.
Greg I agree that it’s true. They generally tend to recognise how fleeting stuff is and tend not to be too petty about anything. 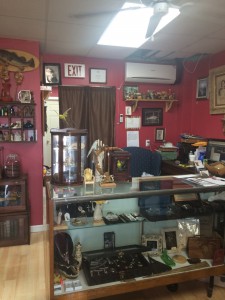 What’s the weirdest thing you’ve ever bought or sold? Have you ever been offered anything to buy you turned away because it was too much?
Heather So many things have passed through our fingertips. Probably the most beloved and weird was Ralph, a gorgeous diaphonized human fetus. We were afraid of the potential issues with shipping him over here when we moved. A small list of favourites: A drawing by Richard Ramirez, Ted bundy’s leg hair, forensic skulls, countless medical tools, specimens and collectibles.
I miss my antique elephant rib and Ralph the most.
Everything is too much money, this isn’t a get-rich kind of thing it’s a hobby gone mad.
We both reluctantly passed on a boot knife reputed to belong to Whitey Bulger as it was likely evidence since he was still wanted.
Greg misses the lion skull we had. It was a massive vintage female lion skull only 1/4 inch smaller than the record male lion. It was gorgeous and we only had that for a day before it sold. 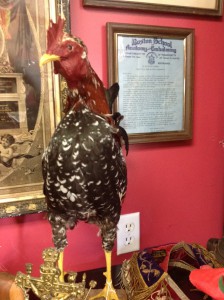 Is the morality of taxidermy an odd reflection on modern sensibilities? There are several supermarkets nearby filled with slaughtered animals in their chiller cabinets, yet people come into your shop and threaten you for selling stuffed animals that died of natural causes. Why do you think taxidermy makes some people so angry?
Heather Both of us think it’s lack of knowledge that makes people angry. They just don’t understand. They feel everything dead should be hidden away and forgotten like anything else unpleasant. I think some people tolerate certain objects in certain surroundings as well like in a museum and they can’t figure out how to categorise it outside of their neat little box. We embrace death and the beauty that is in it and the beauty after it.
I don’t believe in killing for art or taxidermy but generally death is unavoidable.
People just don’t know how to deal with death and instantly want to assume the absolute worst about people. 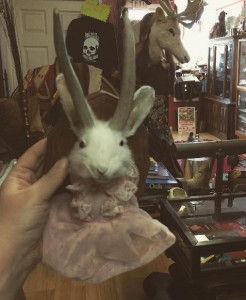 There is evidently a unifying theme or aesthetic behind Pandora’s Box, but it’s very hard to pin down. How  might you define it? It strikes me that one element that many casual observers miss is a strong vein of black humour – am I onto something there?
Heather The unifying theme is us. When we pulled out of multidealer shops and markets and decided to sell in our own space back in 2011, we made a simple rule. If we didn’t love it, it wasn’t allowed in the shop. Many curiosity shops delve into weaponry, air plants or beard creams, we won’t do things to appeal to a market, we will unapologetically keep curating things like they are just for us.  The shop and collections are like looking into our heads.
We absolutely crack ourselves up. There is so much humour in everything we do. Little pope dolls riding ferrets and a nun with a devil mask, a tiny gun in a priests hand, a stuffed deer with a pretty wig. Humour runs through everything and it does run dark. 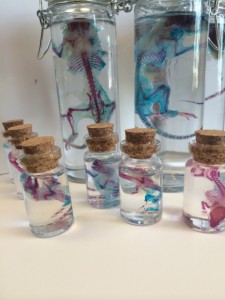 Do you have a ‘holy grail’ item? If there was one thing that somebody might bring into your shop that was your dream – or nightmare – piece, what would it be?
Heather We have a laundry list of things we want. Greg’s wish is an iconic extinct thing – beyond the passenger pigeon we had since he says that just looked like a pigeon – he wants a dodo or a thylacine or something magnificent. I tend to wish for everything I’ve ever sold back. I find the same things over and over because I love them so much and then tell myself I can keep the next one. I truly want another human diaphonized fetus as long as it’s as similar to Ralph as possible. I also would love a skeleton with rickets and a skull with syphlis but ask me tomorrow and my answer will change again.  Anything and everything from an asylum gets both of us quite excited.

In addition to being a retail environment you can actually visit, Pandora’s Box also sell over the Internet for those who can’t make it to York. For those who can, they also offer a wide range of fascinating events and workshops, from taxidermy to tarot reading. I plan to collaborate with Heather and Greg on something pretty unique in the near future. For further details on all of this, and links to stay in touch with Pandora’s Box on Facebook Pinterest and such, click here.