We Brits keep importing all of these American holidays, so why not Thanksgiving? I’d be all for it. We could give thanks for getting rid of all of our religious twunts over the Atlantic. There should probably be an element of apology towards the Native Americans.

On a faintly more serious note, one almost universally ignored reason for the American Revolution was the refusal of the British Government to back the colonists, when the colonists wanted to break treaties made with the natives.

I was discussing this with a historian friend the other night. I observed that the religious nutters in New England began by condemning the natives as children of the Devil because they’d never heard of God and were ‘red’. They then decided the French King was the Antichrist when English-speaking colonies came into contact with rival French Catholic settlers. And finally, George III was identified as the Antichrist once the British had driven the French away and wanted the colonies to pick up part of the bill. Forbidding the puritans from stealing from the ‘demonic’ natives at gunpoint really was the final straw. 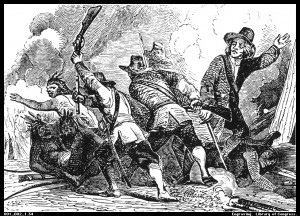 You can sense a pattern in American politics establishing itself way back.

My friend observed that he’d been reading an article arguing that the Pilgrim Fathers weren’t exiled from England. The British were following a very liberal religious policy at the time. As long as you didn’t make a song and dance of it, you could pretty much worship what you wanted (many of the most powerful in the land belonged to Hellfire Clubs). The puritans didn’t want tolerance – they had that – they couldn’t tolerate the beliefs of others. 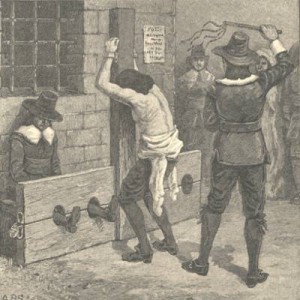 In other words, the Founding Fathers didn’t need freedom from persecution, but craved the freedom to persecute. Which explains a lot about American history if you think about it.