There’s something a bit special, something deliciously, addictively odd about the Welsh horror festival Abertoir. Part of it comes from the paradoxical combination of an insanely acute attention to detail and a laid-back, friendly attitude from the organisers. But the setting also plays its part, as Aberystwyth itself almost invariably contributes its own ineffable oddness to proceedings. In 2016 it came most obviously in the shape of a freak weather front, that sent a sudden salvo of tornadoes across the town halfway through the week.

It looked briefly like the venue would be lifted aloft with all of us inside it, in true WIZARD OF OZ style, before we were all deposited somewhere in Transylvania. Sadly it wasn’t, and the storm evaporated as quickly as it had appeared, though the special showing of THE FOG had to be abandoned. Due to inclement weather, of course. Happily, another venue was found to screen THE FOG, and there were still numerous excellent events to look forward to. As in the first part of my Abertoir rundown – which you can read here – I will be focussing solely on the new films previewed during the week in the hope that this piece can serve as a guide for the best new horror films for fans to look out for in the future… 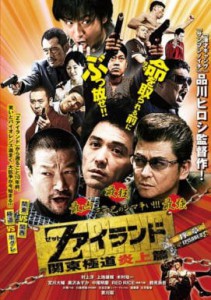 I fear I’ll subvert that goal straight away with DEADMAN INFERNO: TOKYO YAKUZA APOCALYPSE, but I do have an excuse. In 2015, the madcap Japanese gangster zom-com mash-up DEADMAN INFERNO won the Audience Award for best new film of the festival. So when the Abertoir organisers discovered that a prequel had subsequently been made, they set out to secure a copy. It turned out to be something of a challenge, as not only had this prequel not been shown outside Japan, even in its homeland it was a limited release. Undeterred, they secured a screening copy, and of course then had to translate it themselves. So the Abertoir showing of DEADMAN INFERNO: TOKYO YAKUZA APOCALYPSE was a real exclusive, the only subtitled version in existence. As it depicts events preceding the zombie outbreak in DEADMAN INFERNO, there are no walking dead. Taking their place is more of the slapstick gore and violence that made the original such a crowd-pleaser, as a brutal gangster clan tries to muscle in on the territory of a Tokyo rival. It is ridiculous, brutal fun, though at just over an hour with no undead, is more of a supplement to it’s feature length predecessor than a film in its own right. If DEADMAN INFERNO ever secures a Blu-ray release though, TOKYO YAKUZA APOCALYPSE would represent the most killer extra ever. And in the context of the festival, it was yet more evidence of how the organisers are happy to go the extra mile to deliver a unique experience for their audience. 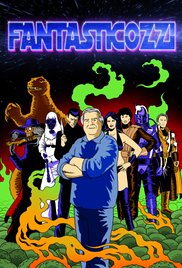 One of the guests of honour at Abertoir 2016 was the veteran Italian film director Luigi Cozzi. He screened his new film BLOOD ON MELIES’ MOON – his first in 27 years – though sadly I missed it. I did however see FANTASTICOZZI, the Brazilian feature length documentary about the director’s career. Cozzi, who runs the Roman horror shop and museum Profondo Rosso for his better-known colleague Dario Argento, is regarded with huge affection in the horror community. It’s probably fair to say that Cozzi has never made a masterpiece, but his films – most of them cheap, over-ambitious cash-ins on more successful Hollywood genre hits – are typically enormously entertaining nonetheless. Perhaps he lacks the raw talent of his more celebrated friends and collaborators like Argento, but FANTASTICOZZI illustrates just how far you can get with a winning personality and an authentic love of fanatic cinema in all of its manifestations. You get the impression that Cozzi got a lot of work simply because people like and trust him, and that he took the jobs because making monster movies is truly in his blood, and it’s difficult not to grin at the results. 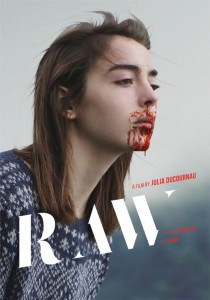 The most hotly anticipated film of the festival was RAW, not least because at previous screenings audience members had reportedly fainted, vomited or even required an ambulance. The Abertoir organisers were quietly sceptical, suggesting that even though it was a strong film, these reports may owe more than a little to marketing hype. Another possibility is that previous RAW previews drew in a lot of audiences unused to horror cinema in any form, as it’s a film with an obvious arthouse appeal. RAW is the story of an innocent teenaged vegan, who enrols at the same bizarre veterinary college as her wild-child older sister, where she discovers some primal appetites she struggles to contain. There is little doubt that the film’s writer and director, Julia Ducournau, believes her debut has a deep message. But is it about the power of feminine sexuality? Our place on the food chain? The folly of making a film when you don’t really have a story? It’s hard to say, and by the end – in my case at least – to care. I should confess at this point that I’m not much of a fan of the Franco-Belgian school of self-consciously transgressive, pseudo-intellectual horror to which RAW belongs. In fairness, RAW is interestingly shot, and isn’t as daftly pompous as MARTYRS or as tediously pretentious as AMER, and does have a welcome streak of black humour. If you’re wrinkling your nose at me slandering the above Francophone horror films – both regarded as classics in many quarters – then you may well get something out of RAW. But, while there were some arresting – even harrowing – scenes, the characters grate, and the script signs a series of plot cheques that the director has no intention of cashing. 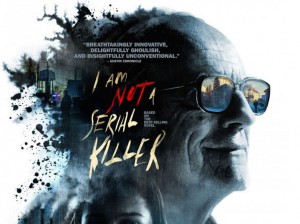 By way of contrast, I AM NOT A SERIAL KILLER takes a similarly unpromising premise – of a teenage outcast (Max Records) who his therapist is worried may become a criminal sociopath – and turns it into something wholly compelling and oddly warm. Our curiously likeable young anti-hero is convinced that the chilly backwater town where he lives is already being stalked by a serial killer, and resolves to stop try and stop them. The most familiar face on the cast comes in the shape of Christopher Lloyd as an elderly neighbour who befriends the troubled teen, and I’d say it’s a career best performance from the veteran actor. A miasma of quiet dread suffuses I AM NOT A SERIAL KILLER and while some weren’t convinced by the film’s final twist – which I’m not discussing here for obvious reasons – I rather liked the boldness of the climax. Chilling and funny by turns, I AM NOT A SERIAL KILLER takes a tired genre trope and turns it into something witty and authentically original, a tense study on just what turns men into monsters. 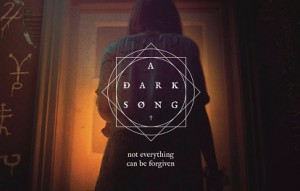 A DARK SONG is set in Wales, so was in a sense playing to a home crowd at Abertoir. It concerns a distraught woman who, destroyed by grief at the death of her son, seeks help from an occultist played by Steve Oram. Oram, perhaps best known for playing the gauche psychopath in the serial killer comedy SIGHTSEERS, plays his sorcerer very much against type – down-to-earth to the point of oafish – which lends a reality to this tale of mystic rites in an isolated country house. Ritual magic(k) has been touched upon in genre cinema a number of times before, but A DARK SONG’s scriptwriter has done more homework than most, delving into the demanding, meticulous, taboo-breaking ceremonies involved, designed to erode the practitioner’s contact with the everyday world of perceived reality. Like most savvy horror filmmakers on a tight budget, the director employs the small cast – it’s almost exclusively a two-handed affair – and limited sets to generate a sense of claustrophobia, as sanity slowly leaves the building. As many such filmmakers discover, however, skilfully building up the tension can create the need for a climactic final act that’s almost impossible to deliver, and A DARK SONG doesn’t quite satisfy in that department. For all that, it’s an interesting, intense film with a fresh angle on the familiar territory of occult horror.

For more information on Abertoir, visit the festival site here.