I haven’t done any music journalism in some time. So I thought it high time I reminded myself why. The subject of today’s lesson is a Japanese novelty act named BabyMetal. If you have no idea what I’m talking about, you’re a lucky person, should close this page, and get on with your life knowing that I envy you. If on the other hand, you read any of the rock press, then you can hardly have avoided the tsunami of hype that has surrounded this otherwise unremarkable, unhappy marriage between Oriental bubblegum pop and generic session metal guitars.

If BabyMetal is of any interest, it is as the band that happened to be in the right place just as the metal media fell under the spell of clickbait journalism. When they discovered the sad fact that the magical internet travel can be driven more effectively by irritating your readers as impressing or informing them. And so everyone began running pieces that riled their core audience, which also attracted a new influx of commentors who enjoyed watching serious music fans being upset.

The music press had effectively begun trolling their readership. And no subject worked better than a trio of Japanese teenage girls, recruited to pretend to front a heavy metal band by one of Japan’s leading talent agencies. BabyMetal, by default, became the first troll metal act.

What caught most by surprised – including one suspects the band, their management, and the magazines hyping them – was when the constant coverage actually started to turn into concrete success. As any advertising executive can tell you, shove anything under people’s noses often enough, aggressively enough, and you’ll thrust it into their subconscious, becoming a trusted and recognised brand, regardless of how objectively low quality it may actually be.

I could’ve picked any one of an endless stream of articles about BabyMetal to illustrate my point. But this piece entitled ‘ROB ZOMBIE Shuts Down BABYMETAL Haters In Epic Fashion’ from Metal Injection’s a particularly depressing specimen. If you’re in for the ride, you can read it here. The article does at least have the virtue of brevity. Indeed it combines so much irritant into such a small space that I think it deserves some sort of Pullitzer prize. So, what’s wrong with it? Where to begin?…

Well, BabyMetal. Duh. Every time you wheel out this clickbait product an actual band dies.

‘Haters’. Haters is not a fucking word! You can have critics, detractors, opponents – hell there are countless synonyms to employ – English is a wonderful language. So quit writing like a teenager with ADHD fluent only in txt spch.

And if somebody is a ‘hater’, maybe they ‘hate on’ this plastic donkey show for a reason. Implying that somebody hates something just because that’s what they do is infantile sophistry. Sometimes, believe it or not, some of us dislike things for a reason.

And few if any metal fans hate the band as such. We just hate what they represent in terms of hype, manufactured pop, and clickbait journalism. Many got into metal to avoid this kind of crap. Shove it under our noses often and vigorously enough and we’re entitled to react.

And can we put this ‘metal elitist’ drivel to bed too. Since when did picking your music on merit become a bad thing? I can see why cynical record execs might like to foster an environment where docile fans will swallow anything you dump in front of them. But if a music journalist finds themselves spinning a similar line, it’s time to look in the mirror. 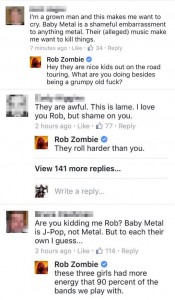 Nobody was ‘shut down’. People seldom are when the liberal media employ this stupid, teeth-gratingly triumphalist expression. Somebody may have deleted a tweet because they were being confronted by somebody they had long admired, who has disappointed them.

And Rob. Rob… I like a lot of what you do, have often defended you from ‘haters’, and you were very personable when I met you. But nobody can accuse you of having impeccable critical judgement. I thought Lords of Salem was bold and interesting. But Halloween? Your choice in hats could use some attention too.

On the subject of energy at gigs, when I’ve seen Rob performing, he was clearly giving it his all, but looked pretty tuckered out by halfway through. Energy isn’t everything in music you know. Nor does being a performer give you the right to ‘shut down’ your fans. The guy whose taste you criticised is clearly one of the guys who put you were you are by buying your albums. Or was… 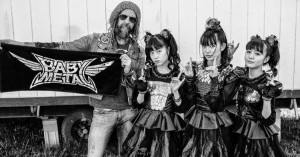 I hesitated to write this. As I’ve already emphasised, the vast majority of the problem most BabyMetal ‘haters’ have is not with the ‘band’, but the way in which this product is being so crassly promoted. By writing this, I’m inevitably contributing yet further to the vast surplus of coverage lavished on this daft novelty act.

To misquote an old adage about religion… Bad music taste is like genitals: we’ve all got some, and they can be great fun. But there is a time and a place, and keep thrusting them in everyone’s face and you’ll start losing friends.

I am aware that the overall tone of this article has been a tad negative. So in the spirit of inclusiveness I shall abandon my metal elitism. Indeed I’m putting together a band of my own. The future of metal! You saw it here first… 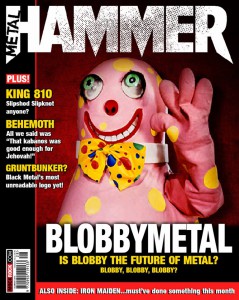